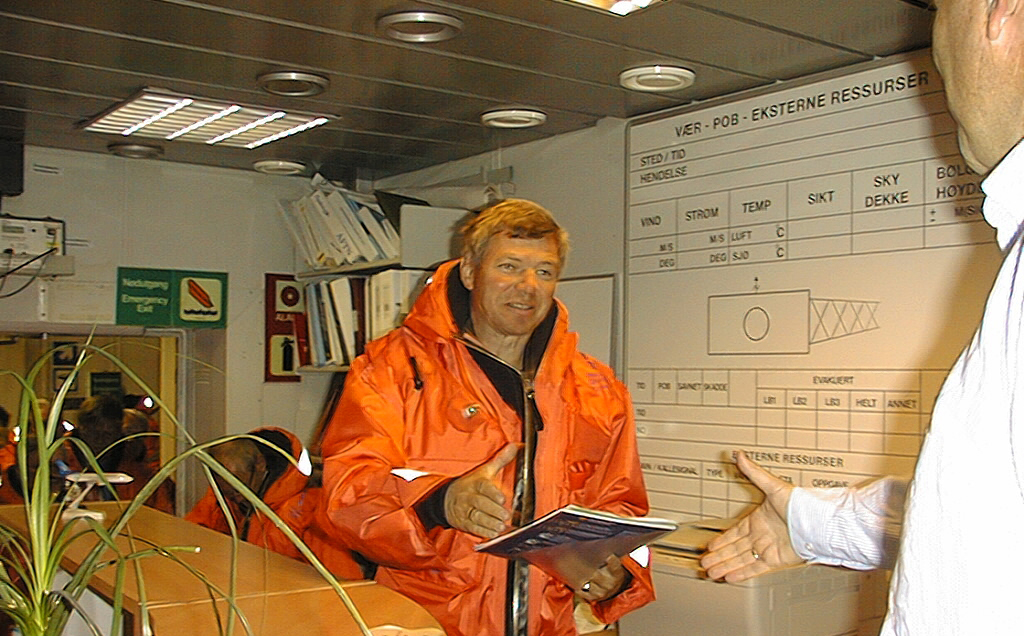 A member of the Storting (parliament) and his party’s candidate for prime minister, Bondevik was paying his first visit to the installation on the Halten Bank off mid-Norway.

“All I had to do was move a small lever and it responded,” said Bondevik. “I’d have liked to shift the electorate as easily as I manoeuvred this crane. That would have been something.”

During his guest performance as a crane operator with the opportunity to lift 45 tonnes, he displayed big interest in equipment on the platform manufactured by Molde Kran. [REMOVE]Fotnote: NTBtekst. 07.08.2001, «Bondevik høyt oppe på Draugen».

Like Bondevik, this company was rooted in the town of Molde south of the Draugen base in Kristiansund. Both communities lie in Møre og Romsdal county.

“My boyhood dream has been realised,” the politician told the press afterwards. “Sitting so high up, feeling the excitement, and operating such a big crane is actually great fun.”

But he was not alone in enjoying the experience. Roald Lekve, the crane operator who showed him how to lift and lower with the crane, also had a point to make.

“Now you’ve been allowed to try out the highest job on board here, it’s only reasonable that I should try out yours when you become prime minister,” he told the politician![REMOVE]Fotnote: Historier fra Draugen av Per Sælevik, 2017.

The occasion for the visit was an invitation from the Confederation of Norwegian Enterprise (NHO) and Norske Shell to the three top Christian Democrat candidates in Møre og Romsdal.

During the six hours the politicians spent on the field, they toured the platform and were briefed in detail about Shell’s operations by the company management.

Bondevik also had a town hall meeting with the workforce, which had decided in a preliminary session that pensions and working time arrangements were the issue.

Gunnar Sembsmoen was deputed to ask about this on their behalf, and explained that life offshore was tough both physically and mentally.

The Christian Democrat was asked if he would help reduce the retirement age on the Norwegian continental shelf (NCS). But he refused on the grounds that the country had a labour shortage.

“All the same, though, we have special provisions which mean that the age limit can be lowered for certain occupational categories,” he noted.

“That could be an option, but we then need sufficient data to demonstrate that many platform workers have to quit before reaching retirement age because they’re worn out.”[REMOVE]Fotnote: NTBtekst. 07.08.2001, «Bondevik høyt oppe på Draugen».

The workforce was not entirely satisfied with that response, and Sembsmoen responded by characterising the politician as follows:

“You know when you see a Sunnmøre native from behind, they’ve got two big bulges in their back pockets – one from a hymnbook and the other from a wallet – and the wallet is always bigger.”

The room fell completely silent. Bondevik, who was standing by the coffee machine, looked stiffly at the floor until the mood lifted again.[REMOVE]