search
arrow_back
close
Skip to content
menu
close
The city of oilOpening the northern NCS
person by Trude Meland, Norwegian Petroleum Museum
“Oil fever” gripped Norway in the early 1970s, and a number of small oil companies were established by selling “people’s shares” to the general public. Any and all could by this stock, and the opportunities to cash in were seen as good. 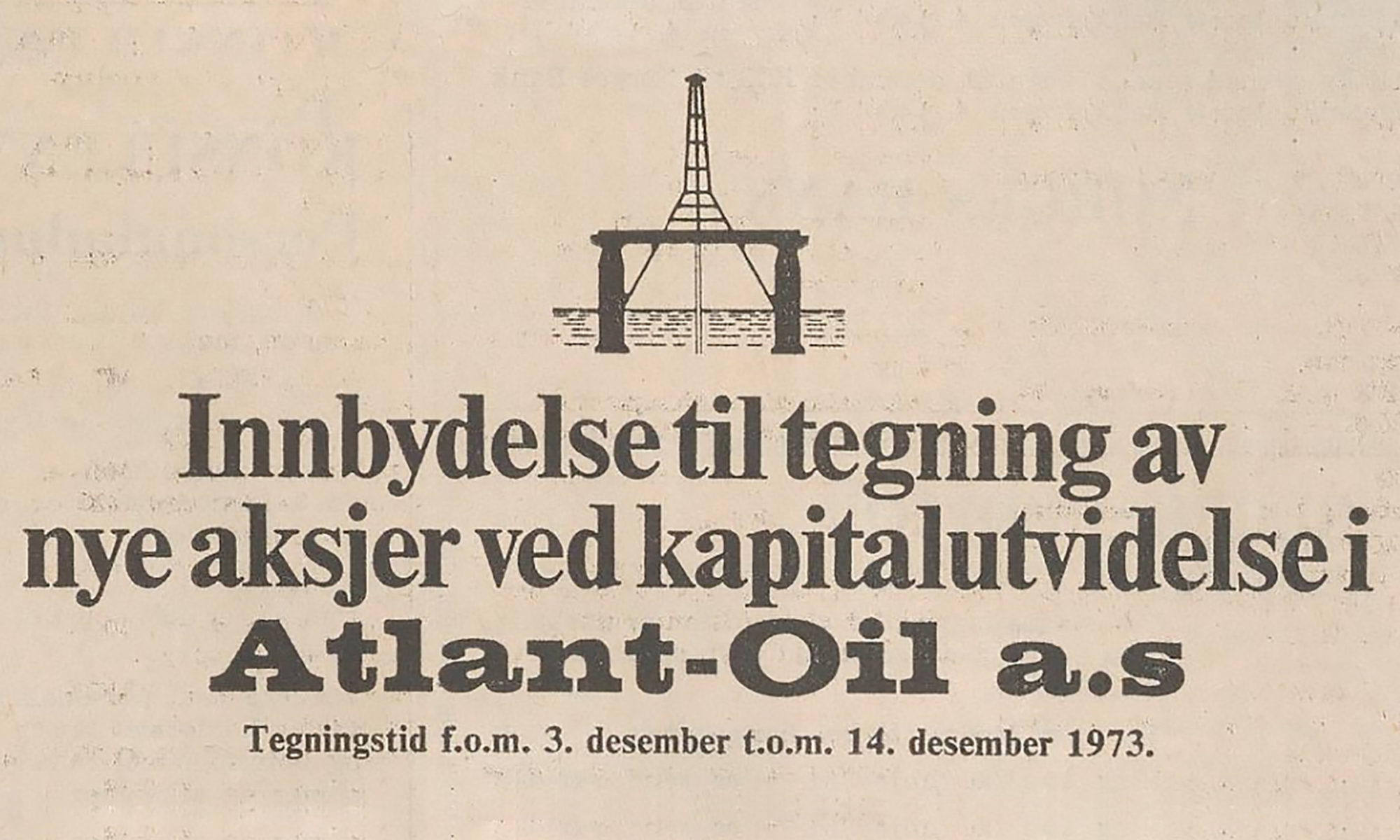 Several promoters saw their chance to suck in large amounts of capital from ordinary Norwegians and channel it into exciting offshore projects. Atlant-Oil in Kristiansund was one of these. A separate oil company for the northern Møre region was discussed by the petroleum committee in 1972. This vehicle for small savers would collaborate over work with a larger partner.

Atlant-Oil’s business purpose stated that it would enter into joint ventures with other enterprises engaged in activities directed at exploring for, producing and utilising oil and gas on the Norwegian continental shelf (NCS). A inter-ministerial committee had proposed Kristiansund in 1972 as a future base port for offshore activity in the Halten Bank area of the Norwegian Sea. The town’s future as mid-Norway’s oil centre was regarded as assured. The initiative to found Atlant-Oil was taken by Rolf Arentz-Hansen, chair of the Kristiansund Commercial Association, Tore Jan Børresen in Kristiansund Finans, William Dall, chair of the local petroleum committee, and lawyer Øistein Selen. Their motive was to highlight interest in a local commitment.

Subscribers to the shares were sought not only in Kristiansund and northern Møre, but also in the neighbouring Trøndelag region. The promoters pointed out that collaboration with companies there would be necessary in the future.

Huge interest was shown in the shares when subscriptions opened on 21 February 1973 – so great that the sale had to be suspended. A ceiling was placed on how many shares any individual could buy. Kristiansund’s town council also subscribed NOK 25 000 (NOK 177 000 in 2017 value).[REMOVE]Fotnote: Adresseavisen. (1972, 27. desember) Kristiansund skal kjøpe oljeaksjer.

Atlant-Oil held its statutory general meeting in April 1973, when Dall was elected as its first chair.

In October that year, the company entered into a collaboration deal with Det Norske Oljeselskap (DNO), Norway’s first national oil company, whereby DNO would conduct all oil exploration and production for Atlant-Oil. The latter secured the right to a 10 per cent stake in DNO’s future licences, while retaining the ability to pursue independent activities, such as base and service operations.

Founded in 1971, DNO was rooted in the Norwegian shipping community and shipowners Jacob Stolt-Nielsen and Jan Erik Dyvi. Its capital was again raised by selling “people’s shares”. DNO’s future participation in Norway’s offshore sector was blocked by the government’s decision that only three Norwegian companies would be allowed to participate on the NCS. These were state-owned Statoil, partly state-owned Norsk Hydro and privately owned Saga Petroleum.

At the same time as the collaboration deal with DNO was signed, Atlant-Oil increased its share capital from NOK 5 million to NOK 25 million. The company envisaged a bright future, and believed that offshore blocks above the 62nd parallel (the northern limit of the North Sea) would be awarded as early as 1973-74.[REMOVE]Fotnote: Adresseavisen. (1972, 20. desember) Samarbeid Trøndelag – Nordmøre om oljen.
Atlant-Oil took the initiative to establish Atlantic Supply in 1973. Based in Kristiansund, this limited partnership planned to build two large anchorhandling/supply ships.[REMOVE]Fotnote: Stavanger Aftenblad. (1973, 6. desember). Forsyningsskip fra nytt selskap.

The local Storvik Mekaniske Verksted shipyard secured the fixed price contract for these vessels. At NOK 82 million, this ranked as the largest single order so far awarded in Kristiansund. It soon became clear that collaboration with larger entities would be necessary in order to secure work for the ships from the big international oil companies.

Supply vessel operation became organised on a collaborative basis across the whole North Sea basin, through either joint ownership of vessels or the pooling of tonnage. The two anchorhandlers were placed in Edda Supply Ships, a pool encompassing 12 ships based in Aberdeen. It was organised by Jan Staubo at Helmer Staubo & Co with Victor Schage in Oslo, Johs Østensjø in Haugesund, Johs Presthus in Bergen and Atlantic Supply.[REMOVE]Fotnote: Skipet.no. Norsk skipsfartshistorisk selskap. De første forsyningsskip. Hentet fra http://www.skipet.no/maritimt/offshore/de-forste-forsyningsskip (publiseringsdato ukjent, lastet ned 10.1.2018)

Big spinoffs were created by the last of these companies in and around Kristiansund. The company did well initially, and controlled six ships at peak with 110 seafarers on its payroll. Then came the downturn. The offshore market slumped in the autumn of 1975, and pessimism proved justified during 1976 as far too many supply ships competed for work.

A lot of them had to laid up for long periods between poorly paid jobs. Although the ordering boom was fortunately over, further pressure was put on the market when 26 newbuildings were delivered during the year.

Demand proved to be strongest for the newest and most powerful vessels, which did relatively well, while the older and simpler ships faced the biggest problems. In the hope of finding better conditions elsewhere, a number of supply ships were transferred to other markets – including Brazil. Norwegian vessels also flooded into the UK market, where they already had a 40 per cent share.[REMOVE]Fotnote: Skipet.no. Norsk skipsfartshistorisk selskap. De første forsyningsskip. Hentet fra http://www.skipet.no/maritimt/offshore/de-forste-forsyningsskip (publiseringsdato ukjent, lastet ned 10.1.2018)

Things improved somewhat after the 1976 crisis. With 70 rigs drilling in the North Sea during the summer of 1977, demand for support ships was better than expected. Again, however, the big vessels were the most attractive and smaller ones did poorly. That trend continued into 1978, when Norway’s supply ship fleet began to slim down. Older units were sold abroad at low prices, and hopes for an improvement started to fade. Some groupings with small vessels retrenched, like Sandøy Supply and Norway Supply.

Johs Larsen and Bjergningskompagniet went into liquidation, while several of the partners in Bugge Supply and Edda Supply pulled out. It was not until the revolution in Iran and Khomeini’s takeover in 1979, with its threat of oil shortages, that optimism began to be restored in the supply ship sector. Atlantic Supply got both its timing and the market wrong. When the Halten Bank was opened for exploration and production in 1980, its supply ship fleet was gone. The local shipowners had lost their assets, and with them went northern Møre’s capital base.[REMOVE]Fotnote: Hegerberg, H. (2004). Et stille diplomati : Oljebyen Kristiansund 1970-2005. Kristiansund: Kristiansund kommune: 89.

Things did not go any better for Atlant-Oil, with DNO launching what amounted to a coup d’etat at the 1975 annual general meeting. It secured a majority on the supervisory board and ejected the northern Møre members. The Kristiansund company held substantial liquid assets, while DNO had suffered big losses and needed capital. It ignored Atlant-Oil’s regional policy intentions, proposed a merger in the autumn of 1976 and completed this take-over the following spring.