search
arrow_back
close
Skip to content
menu
close
Opening the northern NCSPolitical management of Norway’s oil sector
Society
person by Trude Meland, Norwegian Petroleum Museum
Oil and gas activities represent the most important industry in Kristiansund. They are also crucial for the town’s airport and not least for the construction and operation of its heliport. 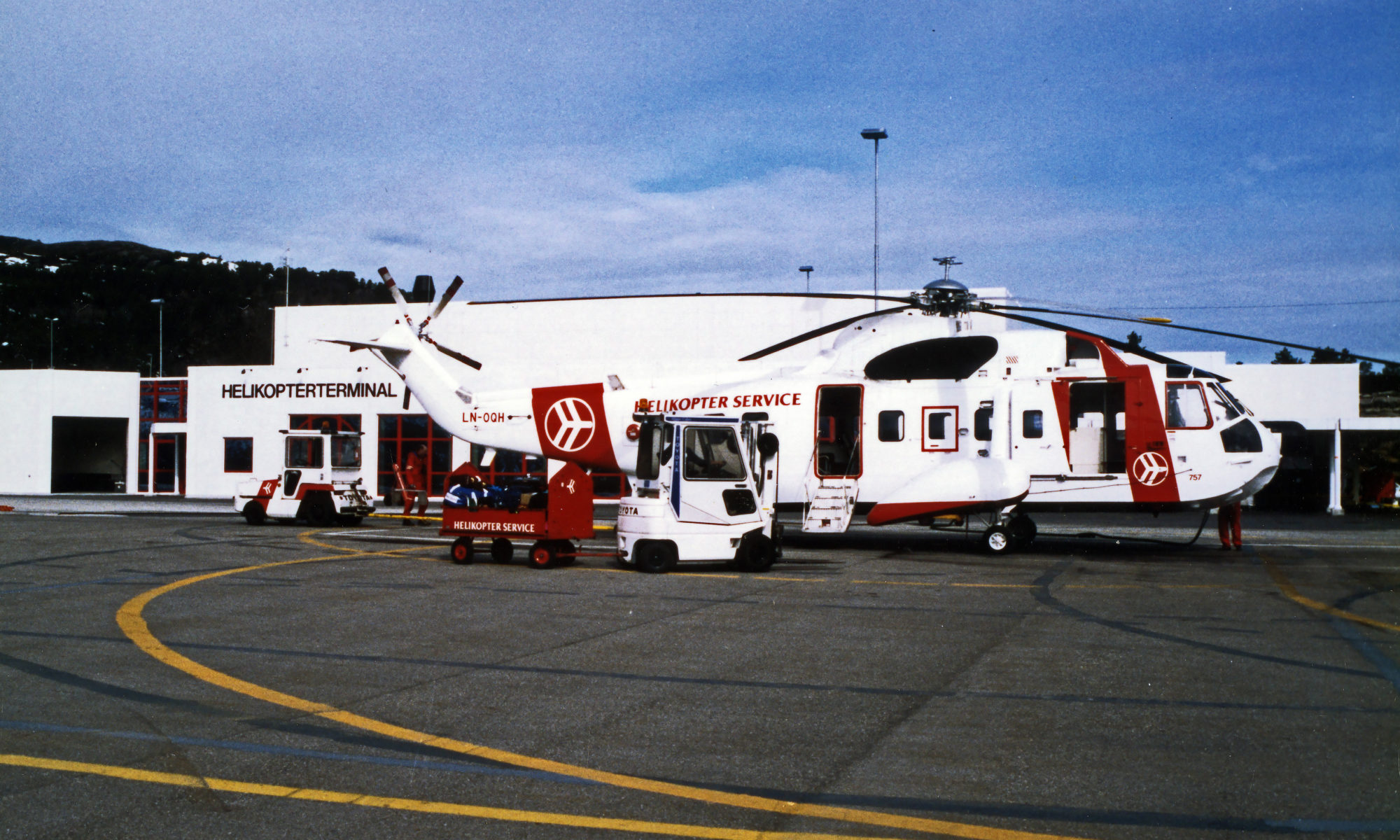 This facility played an important part in the decision which made this mid-Norwegian port an oil centre. It was an important argument for Norske Shell when it resolved to locate the operations office for Draugen there in 1987.

Kristiansund was chosen by the government in 1975 as the main supply base for offshore operations on the Halten Bank in the Norwegian Sea, which was opened for oil activities four years later (see the article about opening the northern NCS).
With the port as the natural starting point for exploration drilling, the need also arose to transport personnel to and from the rigs. The choice of site fell on Kristiansund Airport Kvernberget.

Norway’s Saga Petroleum, as the first company to spud a well in the Norwegian Sea, was contacted at an early stage by Norway’s Helikopter Service company about crew transport.

A collaboration agreement was established in February 1980, and the first flight offshore from Kvernberget went to Saga’s Byford Dolphin rig on 30 June 1980. A Sikorsky Bell 212 machine had the honour of performing this maiden trip. Conditions were poor for both staff and passengers in the early years. Operations began with some prefabricated huts to serve as warehousing, offices, lounge and departure hall. A local subcontractor handled cargo and passengers. Helikopter Service was reluctant to invest in better facilities, given the uncertain prospects.[REMOVE]Fotnote: Hegerberg, H. (2004). Et stille diplomati : Oljebyen Kristiansund 1970-2005. Kristiansund: Kristiansund kommune: 128. As activity increased, however, more permanent installations became necessary.
The first helicopter terminal opened in 1981, a temporary structure where the one machine allocated by the company was stationed.[REMOVE]Fotnote: Kristiansund Airport Kvernberget. Documentation for archival conservation. 2010.

A 750-square-metre hangar with space for two helicopters stood ready the following year. That made it possible to do maintenance work on the machines in situ. A 200-square-metre office and workshop wing was also added.[REMOVE]Fotnote: Romsdalsposten. (1982, 13. august) Start på noe som kan vokse seg større. The level of activity increased steadily over the next three years, and Helikopter Service invested in new helicopters. It now had two stationed in Kristiansund.[REMOVE]Fotnote: Tidens Krav. (1984, 8. september) To helikoptre på Kvernberget.

A peak year in this period was 1985, characterised by substantial exploration and drilling work off the Møre and Trøndelag coasts. That was followed by a period from 1986 to 1990 when activity fluctuated. The Storting (parliament) came to the rescue in 1987 by selecting Kristiansund to host the heliport for Draugen as well as the supply base and operations office. The town also landed the base and helicopter transport functions for Heidrun.

Norske Shell entered into a three-year deal with Helikopter Service in 1992 for personnel and cargo flights to and from Draugen, with options for extensions.
More correctly, the contract was actually awarded jointly with Conoco – the first time two oil companies entered into a shared agreement on helicopter transport of freight and passengers on the Norwegian continental shelf (NCS).

Worth NOK 85 million, this job was the largest single offshore contract awarded in Kristiansund until then and allowed Helikopter Service to increase its workforce.
New personnel were recruited and staffing at the heliport increased from 13 to 18 people.[REMOVE]Fotnote: Adresseavisen. (1992, 19. mai) Økt virksomhet i Kristiansund. Installation of the Draugen platform began in 1992, sparking a sharp increase in traffic.

A total of 14 000 passenger journeys were made between Kvernberget and the offshore installations during 1993, making it the third busiest heliport in Norway.And a new helicopter terminal was built in the same year at a cost of almost NOK 15 million.

Although Kvernberget has functioned as the heliport for the Halten Bank/Norwegian Sea since the first wildcat, this does not mean no battles were fought over who should play this role. Some bitterness was expressed in parts of Trøndelag further north in 1980 when Saga picked Helikopter Service and Kvernberget to provide its offshore helicopter services.

It was claimed in several quarters that the Ørland air force base in Sør-Trøndelag county, with its up-to-date outfitting, would have been a more sensible choice.
“It is astonishing, to put it mildly, that one of northern Europe’s largest and most modern air stations should not be considered relevant as a heliport,” commented Arnfinn Astad from Bjung at a meeting of Sør-Trøndelag’s local authorities.
“Nowhere else can match Ørland for the regularity of departures. I believe time will show that a great many of the flights supposed to land at Kvernberget will actually fly via Ørland.”[REMOVE]Fotnote: Adresseavisen. (1980, 20. mai) Ørland bør bli helikopterbase.

Parts of Sør-Trøndelag could have done with the economic benefits a heliport would provide. But Saga stuck to its guns and maintained that Kvernberget was the most practical option. This was both because of its proximity to the supply base and not least because the Kristiansund airport had a better-developed network of air services than Ørland.

Nevertheless, the latter did not give up. It got help from Sør-Trøndelag county council, which followed up the issue and proposed Ørland as a heliport to the Ministry of Transport and Communications. But the latter joined with the Ministry of Petroleum and Energy in giving the thumbs down. It argued that Kvernberget had fulfilled the heliport function satisfactorily, and that no grounds therefore existed for moving elsewhere.[REMOVE]Fotnote: Adresseavisen. (1984, 6. juni) Ingen Base på Ørlandet.

Several other candidates eventually joined the fray. A recurrent candidate over the next few years was Trondheim Airport Værnes. Even before the location of operations, supply services and heliport for Draugen was debated in the Storting, the struggle between Møre og Romsdal county and Trøndelag was in full swing.
The battle was not only over helicopter flights but also covered all other land-based operations related to oil fields off Møre, Trøndelag and Nordland county.
Norske Shell had made it clear that the company wanted everything to lie in Kristiansund. Since oil from Draugen would be brought ashore by shuttle tanker, a production landfall was not an issue.

Statoil employees at Stjørdal near Værnes took up arms in 1998 with a request that the company began using their local airport as its main base for helicopter flights to/from the Norwegian Sea.

Downgrading the heliports at Kristiansund and Brønnøysund further north to mere support functions would make it easier for the Statoil personnel to get to and from the fields.

At the same time, offshore workers from parts of the country beyond mid-Norway would find travel to Værnes easier since its network of flights was better developed than at Kvernberget. An important argument supporting this request was safety, with Værnes said to have greater aviation technology expertise than the Kristiansund facility. But the proposal was countered precisely on safety grounds. A shift to Trondheim’s airport would mean flying further over land, which could increase the threat of icing.

A report on helicopter transport off mid-Norway had been commissioned from the Sintef research foundation after the Norne accident.[REMOVE]Fotnote: A Helikopter Service machine en route to the Norne production ship crashed in the Norwegian Sea about 100 nautical miles west-north-west of Brønnøysund in 1997. The two pilots and 10 passengers were all killed. This study concluded that the safest option was to fly from either Kvernberget or Brønnøysund. Distances from these two heliports to the installations were also shorter than from Værnes.[REMOVE]Fotnote: Adresseavisen. (1998, 5.mai) Sier nei til helikopterbase på Værnes. But the adherents of the latter did not give up so easily.

Criticism continued to be voiced about the facilities at Kvernberget. The terminal was small and old-fashioned, and it was nicknamed “Venteberget” (Waiting Hill) – a hopeless place to relax during waits because of a lack of seating. Norway’s Braathens Safe airline discontinued its service between Kristiansund and Trondheim in 2000, giving fresh ammunition to the Værnes campaigners.
Without direct flights, it would be very difficult and extremely expensive for oil workers from Trøndelag to reach the Halten Bank. They had to fly to Kristiansund via Oslo Airport Gardermoen.[REMOVE]Fotnote: NRK. 2002, 30. mai) Ønsker helikopterbase på Værnes.

Former Centre Party leader Johan J Jakobsen now threw himself into the fray. He put a direct question in the Storting to Olav Akselsen, Labour’s petroleum and energy minister, about the possibility of helicopter flights from Værnes to the Halten Bank. Jakobsen emphasised that lack of direct flights to Kristiansund could prevent Trøndelag fabricator Aker Verdal competing for offshore operational and maintenance work. He added that Værnes would not conflict with the Kvernberget heliport, but serve as a supplement.

Akselsen’s response was clear: “Where these issues [the plan for development and operation] are concerned, the government and the operator have decided that helicopter services should be allocated to Kvernberget. That decision stands.”[REMOVE]Fotnote: Written question from Johan J Jakobsen (Centre Party) to the minister of petroleum and energy. Document no 15:333 (2000-2001). Submitted 6 April 2001 – answered 24 April 2001 by petroleum and energy minister Olav Akselsen.

Despite the clear statement from the ministry that relocation of the heliport was out of the question, the oil workers pressed yet again for its transfer to Værnes.
They saw a fresh opportunity when the Labour government was replaced by a non-socialist coalition and Christian Democrat Einar Steensnæs became the petroleum and energy minister.

Several unions asked him to take a new look at Værnes as a base for helicopter flights, but yet again without success. Throughout these various rounds over location, Kristiansund and northern Møre fought back with everything they had. That reflected the importance of the heliport for town and region. The position of the heliport to serve oil and gas fields in the Norwegian Sea was enshrined in the licence terms approved by the Storting. Nevertheless, as outlined above, repeated attempts were made by politicians, business interests and oil workers in Trøndelag and Nordland to get this role moved elsewhere. But all these efforts ended up the same way – petroleum and energy ministers have specified, regardless of their political complexion, that the terms set by the Storting remain unchanged.

The oil companies operating in the Norwegian Sea have had the same attitude. Norske Shell has also sided with Kristiansund and made it clear that transferring helicopter services or sharing these with Værnes would be unacceptable. Such support from the operator company and other business players has been important in preserving Kvernberget as the heliport.

But something had to be done about the helicopter facilities at the airport. It lacked sufficient capacity, having been originally built for around 18 000 passengers a year.

By 2005, offshore workers were making almost 70 000 trips annually between Kvernberget and the oil installations in the Norwegian Sea. Planning of a new heliport began as early as 2000, but nothing concrete happened. Kvernberget was finally incorporated in airport owner Avinor’s long-term plans in 2008, but these also suffered delays.

A new runway and a new operations building were completed in 2012. However, a joint terminal for the airport and heliport remains to be constructed. Plans in late 2017 called for work to start on this building in 2018, and the dream is to have it ready for the 50th anniversary of Kristiansund airport in 2020.

Economy & Society: Society
Vestbase
The Vestbase supply base in Kristiansund was opened in 1980. Along with a functioning heliport, it was crucial for Norske Shell’s decision to place the Draugen operations organisation in the town.
Economy & Society: Society
Foundation stone and prized drawing
Petroleum minister Eivind Reiten had nothing but praise for Norske Shell’s exemplary conduct when he laid the foundation stone for the Draugen platform on 28 August 1990.
© Norsk Oljemuseum
close Close